That’s right, the man in black. 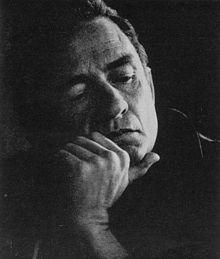 Singer-songwriter Johnny Cash was born February 26, 1932, in Kingsland, Arkansas. In 1950, Cash joined the Air Force and trained in Texas where he met his first wife. After his service and discharge, he formed a band and landed a record deal. By the early 1960s, he was a musical superstar. In 1967, he married June Carter. He recorded his last track of his final album a week before his death in 2003.

“I’d like to wear a rainbow every day / and tell the world that everything is o.k. / But I’ll try to carry off a little darkness on my back. / Until things are brighter, I’m the Man in Black.”

Singer and songwriter Johnny Cash was born John R. Cash on February 26, 1932, in Kingsland, Arkansas. The son of poor Southern Baptist sharecroppers, Cash, one of seven children born to Ray and Carrie Rivers Cash, moved with his family at the age of 3 to Dyess, Arkansas, so that his father could take advantage of the New Deal farming programs instituted by President Roosevelt. There, the Cash clan lived in a five-room house and farmed 20 acres of cotton and other seasonal crops.

John, or J.R. as he was known to those close to him, spent the bulk of the next 15 years out in the fields, working alongside his parents and brothers and sisters. It wasn’t always an easy life, Cash would later recall. At the age of 10 he was hauling water for a road gang and at 12 years old he moving large sacks of cotton.

“The entire family, my parents, two brothers and two sisters spent the first night in the truck under a tarpaulin” Cash once said about his family’s move to Dyess. “The last thing I remember before going to sleep was my mother beating time on the old Sears-Roebuck guitar, singing ‘What Would You Give In Exchange For Your Soul.”

Music was indeed one of the ways the Cash family found escape from some of the hardship. Songs surrounded the young Johnny Cash, be it his mother’s folk and hymn ballads, or the working music people sang out in the fields.

From an early age Cash, who first picked up the guitar at the age of 12, showed a love for the music that enveloped his life. Perhaps sensing that her boy had a gift for song, Carrie Rivers Cash scraped together enough money so that Johnny could take singing lessons. Cash was only in his early teens and didn’t have much in the way of formal musical training, but after just three lessons his teacher, enthralled with Cash’s already unique singing style, told him to stop taking lessons and to never deviate from his natural voice.

Religion, too, had a strong impact on Cash’s childhood. His mother was a devout member of the Pentacostal Church of God, and his older brother Jack seemed committed to joining the priesthood. Chances are John’s own faith would have always exerted itself to some degree on his own life, but Jack’s tragic death in 1944 at the age of 14 in a farming accident solidified Cash’s own faith in God.

He is a legend. His name will live after we die, as long as there is good in humanity and some kind of musical recording devices in the crazy future.